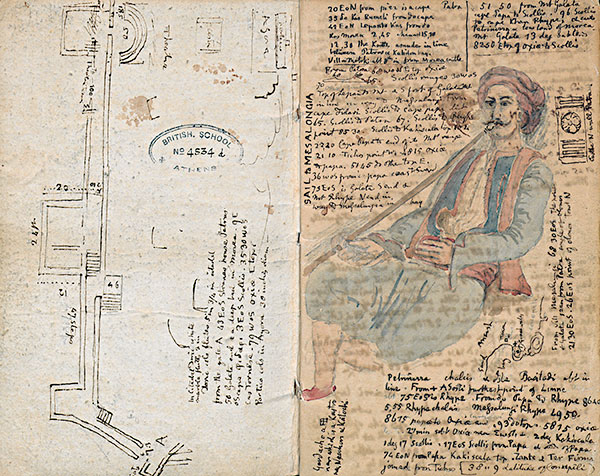 This notebook cover is stamped with the word ‘Angles’ referring to compass-bearings employed as a method of navigation using angles in relation to North. The notebook contains lists of compass-bearings and relational location information of places on the Greek mainland (Peloponnese, Central Greece, Attica) and the Ionian Islands. A few locational maps are sketched at some entries. 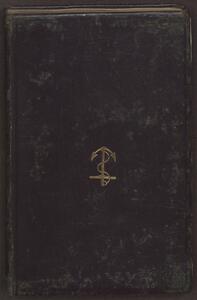 This notebook, stamped with an inverted ship's anchor on the cover, contains itineraries along with sketches, texts of inscriptions and compass-bearings for numerous sites in Greece. According to Woodward and Austin (1925), most of the information was recast in Gell's 1819 publication, Itinerary of Greece. This is a sketchbook with drawings of various places and people (including caricatures and some self-portraits). Sketches of places in Greece include the Acropolis of Athens, 'Temple of Jupiter Penhellenicus' (Temple of Aphaia) on Aegina, a plan of Mycenae, several landscape views of 'Scio' the capital of Arcadia and a view of Delos from the island Rhenea. 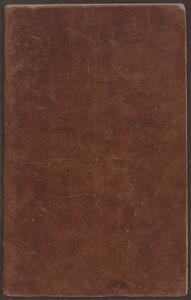 The first half of this travel book is filled with compass-bearings and distance data on places in relation to Patras, Missolonghi, and the islands of Oxeia and Ithaca. Mixed in with this locational information are drawings of people, maps and coastlines, and Greek inscriptions. The second half of the book is blank. 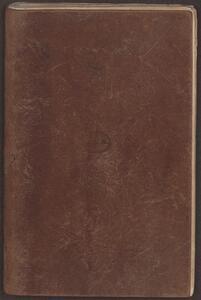 Written on the flyleaf of the notebook is 'Book of Marble, Acroteria &c'. The notebook is dedicated to the study of architectural marbles, primarily acroteria, and how they are decorated. However, it also includes drawings of other objects, landscape views of Athens and a few inscriptions. Most of the drawings have been made on different papers and then glued to the notebook pages. Near the end of the notebook is a list of 'Angles' or compass-bearings and relational location information on sites in Greece. 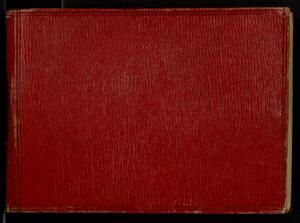 This notebook begins with miscellaneous notes about Eleusis including a few inscriptions, and a two-page inked sketch of the landscape of Athens. After this sketch, the notebook contains information on Gell’s itinerary (with numerous compass-bearings) from Athens to Smyrna, Chios, Samos, Bodrum, Didyma, Cnidus and Rhodes. Woodward (1926) dates this voyage from April to September 1812, ending when Gell landed at Rhodes. Woodward also indicated that some of the information was later published in various volumes of Antiquities of lonia published by the Society of Dilettanti. Interspersed with the descriptions are architectural drawings, inscriptions and plans.