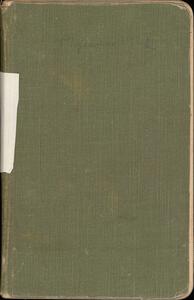 This notebook is a continuation of notebook MYC 1/2 and is written in June of 1922. The first half mostly records the tombs of the Kalkani Cemetery and the second half documents excavations back at the Palace, both inside and the areas around it including details on the Hearth, Throne Room/Megaron, Terrace of Pithoi; as well as the Ramp House, the Granary, and some of the Tholos Tombs. She also has made sketches and written notes on several artefacts and the iconography of some frescoes. 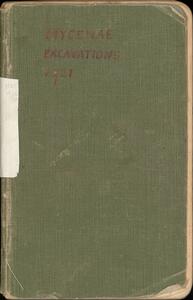 Notebook recording the progress of the excavation and information about finds in both the 1921 and 1922 seasons. Lamb records areas she is excavating from May-June 1921 including the fresco area, the NW slope, various rooms in the Palace (Megaron), Terrace of the Pithoi, the Court and some of the Tholos Tombs. She writes in detail about the frescoes in the Palace. She also has written excerpts from publications relevant to her work in Mycenae. Her recordings in May-June of 1922 focus more on the tombs of the Kalkani cemetery.