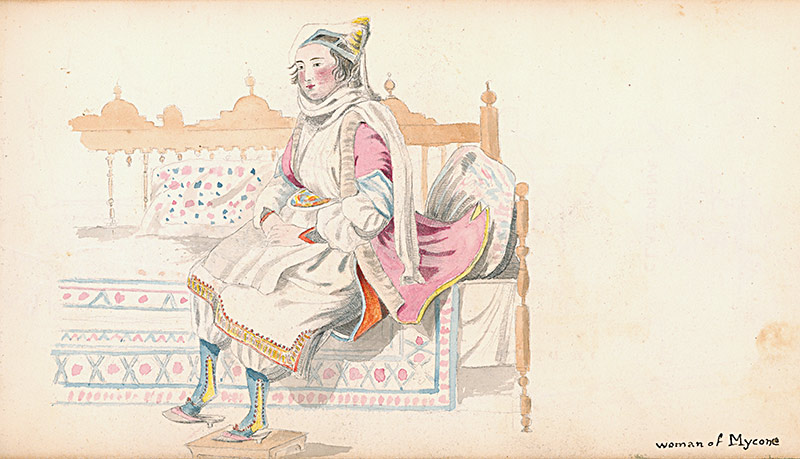 The personal papers of The Hon. Keppel Richard Craven (1779-1851) held by the British School at Athens include one undated sketchbook, probably produced between 1811 and 1813, with the name, ‘K. Craven’ written on the flyleaf. Craven was an English traveller, member of the Society of Dilettanti, and a close friend and travel companion to Sir William Gell.

This red leather-bound sketchbook was most likely created during the Second Ionian Mission as it matches similar ones kept during this tour by Craven’s companions, William Gell and the architects John Peter (Deering) Gandy and Francis Bedford, which are now housed in the British Museum. Craven documented architecture, landscapes, people, and some antiquities in his drawings, some of which were in colour. Few of the drawings have identifications but those that are identified include Bounarbashi (modern Pınarbaşı) in the Troad, 'Mycone' (probably Mykonos), Patras, Zante (modern Zakynthos), and Corinth. There are also plans of the harbour of Valetta in Malta and the town of Clazomenae (modern Urla) in Asia Minor.

The sketchbook was acquired in 1923 by Thomas Ashby, Director of the British School at Rome, from a dealer in Naples, along with some notebooks of Gell (see the William Gell Personal Papers). Two letters dated 6th June 1924 and 8th July 1924 from Ashby to Arthur Woodward, then Director of the British School at Athens, regarding the acquisition of the sketchbook are pasted into the notebook at the end.