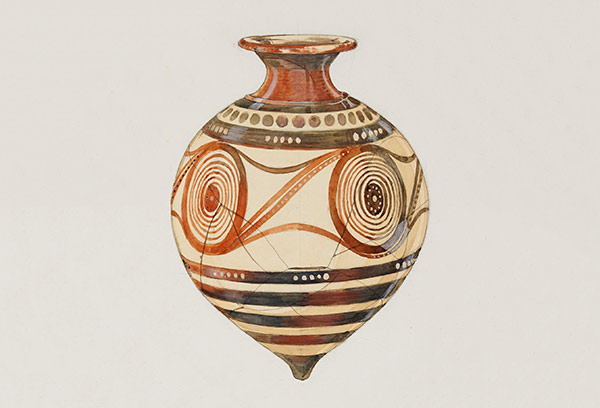 The Mycenae Excavation Records consist primarily of original site plans, drawings and watercolours of artefacts, as well as a few notebooks and photographs, produced during the 1920-23 British School at Athens excavations at Mycenae. The plans and drawings are both preliminary works in pencil and final works in ink, some of which were later marked up for publications. Most of these documents were left to the BSA by Alan Wace and Piet de Jong either following the 1920-23 seasons or after they had been published. Some of the original drawings from the Mycenae Excavations were also used in the 1936 exhibition, ‘British Archaeological Discoveries in Greece and Crete, 1886-1936’ hosted at Burlington House (Royal Academy of Arts) in London and returned to the British School at Athens soon afterwards.

During the early years excavation records were usually left in the care of the Assistant Director of the British School at Athens who registered them on a card catalogue system. The Mycenae Excavation Records, as a collection, seems to have been first constructed in the late 1930s after the material from the 1920-23 excavations had been finally published in the reports of the Annual of the British School at Athens, volume XXIV (1920) and XXV (1921-1923)), and Chamber Tombs at Mycenae (Society of Antiquaries: Archaeologia, 82 (1932)); and the panels from the 1936 Exhibition at Burlington House were returned from London. After Winifred Lamb’s death in 1962, the BSA received a large bequest of books and papers from her estate, amongst these were the two excavation notebooks Lamb had kept during her work at Mycenae in 1921 (MYC 1/1) and 1922 (MYC 1/2). In 1972 renowned archaeologist, Sylvia Benton, donated some personal and academic papers of her colleague, the archaeologist Walter A. Heurtley, to the British School of Athens. Two of these items were his notebooks (MYC 1/3 and MYC 1/4) from 1922 when he worked at Mycenae. The last accessions to be made in the Mycenae Excavation Records were watercolour drawings (MYC 3/1/27 – MYC 3/1/32) framed by Elizabeth B. French and left to the British School at Athens in 1994 following her tenure as the School’s Director.

The Mycenae Excavation Records collection was re-arranged and re-catalogued in 2019 according to ISAD(G) and to better reflect the material within it. It was re-arranged by type of materials in the following hierarchy:

Notebooks (MYC 1) contain the notebooks of Winifred Lamb and Walter Heurtley donated later to the BSA in 1963 and 1972 respectively.

Site plans (MYC 2) consist of drawings of the Palace, Grave Circle, Lion Gate, in addition to various tholos tombs such as the Tomb of the Genii & Treasury of Atreus, and, tombs from the from the Kalkani and Third Kilometre Cemeteries.

Artefact drawings (MYC 3) consist of watercolour and ink drawings representing ceramics, frescoes, small finds, and miscellaneous items such as stelae, rhytons, mirrors, ivory carvings and tools found near the Lion Gate, Granary, Tomb of Aegisthus, Ramp House and the Palace. Additionally, a few are reconstruction drawings of frescoes initially discovered by Tsountas in 1886.

Some of the small finds represented in the drawings are jewellry (beads, gems, rosettes, rings, etc.), seal stones, plaques, carvings of animal tusks, as well as metal works (arrow heads, nails, and fasteners) and were discovered in the Treasury of Atreus, the Tombs of Clytemnestra and the Genii, the Rhyton Well, and tombs from the Kalkani cemetery.

Miscellaneous (MYC 4) consists of printer’s proofs, publication mock-ups, photos, and four panels from the BSA 1936 Exhibition (Burlington House, London) as follows: two enlargements of photos showing the Grave Circle and Lion Gate on mount board and two panels (made up of smaller drawings later deconstructed)- one showing the terracotta figurines from tombs 504, 513, 524; and the other bronze weapons found in the Palace and the Kalkani Cemetery.

The digitisation of a considerable part of the Mycenae Excavation Records and the BSA SPHS Image Collection was funded by the Faculty of Classics, University of Cambridge, in celebration of the centenary from the start of Alan Wace’s work at Mycenae in 1920.

The Mycenae Archive, which digitally unites the collection housed at the Archives of the Faculty of Classics at the University of Cambridge and the collections at the British School at Athens pertaining to British Excavations at Mycenae, can be found here